When I woke this morning I found a note in my inbox from someone who means a great deal to me. It was a short note, just a line, for a memorial service for the man who had transformed her life in a way I'd never seen another do in the 20+ years we'd known each other. I don't know what the term of art would be -- friend, lover, companion, boyfriend - for their relationship.

His illness was brief, severe and terrifying. He left behind a rich reservoir of people who loved him and a lifetime of achievements unfinished yet of such texture that we who love nature and the world beyond our immediate geographic borders owe him a debt I was not even aware of until I read his obituary and then the words of friends, colleagues and loved ones who had found voice on a website devoted to his memory.

We met only a few times, this gentleman and I. But I remember his voice and the rough grace of hands used to the air equally as to the corridors of power. Gentle, compassionate and strong as those who know the meaning of each moment.

He died January 20th, Inauguration Day. I had no idea. Yet all through the day today I felt that handshake wrapping from the heel of my hand around the bones and skin and muscle. I wondered at the loss of it, of the hands that would miss that subtle yet profound embrace, and of the power of so simple a gesture, of the many who should so very much have the chance I had to take it in, to make it a part of themselves, to retain and refocus it into their understanding of the world. So simple a gesture but so resonant.

The memorial service came in the season's first snowstorm. Despite the challenges it presented for those attending I am sure it was in its way fitting, nature's salute to a fallen friend who at that moment would have loved nothing more I suspect than to be out in it, shallow though the idea of winter in Washington may be.

I was miles away, no more in the scheme of his life than any brief acquaintance should be. Yet all day I carried that handshake with me. It was a gift I didn't deserve, and one that I had no cognizance of receiving when it happened some years back. But this is the magic and the pain of being human. So much of depth happens while, as the song goes "we're busy making other plans." It is not till later that we understand that we're different in some small way than we were before a brief encounter. Those events, those experiences, rarely are about language. They go deeper than words. They become memory, but of a different sort than that which accounts for a phone number or a grocery list. They are physical memories, muscle memories. They linger in our tissue and ligaments, accesible through passion and that primal place we all posess but which dancers access every day to transform the linguistic into the physical.

Movers remember and are revealed to the world this way -- through muscle memory. That which we do on stage cannot be achieved by "thinking." The body and the non-verbal mind take the pilot's seat and we glide through dances, entwined with each other, with the music, with the moment, in a way you cannot understand if you don't dance. It's our gift and our state of grace. It's our language with ourselves and our companions, our embrace with the world.

The sun set on the day hours ago. Somewhere a person I barely knew is being mourned, loved, missed, celebrated and, I hope, knows in whatever way it is meant for us to know the love of those we have left behind, that his time here mattered.

Dancers pass the world on through movement. What we know we share by imparting a dance, a step, a moment and in so doing give over the essence of our experience to another. It is a private language in its way. But a handshake? That I can share. It's in my muscle memory now, this gentleman's handshake. A gift.

I believe we outlast our own short lives this way -- carried forward by those we touch, and that in this way we echo down the ages. Whether we are known by name or deed is not for us to decide. We change the world in the simple gesture, the quiet step under the lights and the handshake in the hall.

We are, in a way, the sum of our experiences, and those experiences are the sum of all those who came before, deep into a past we cannot know, but carry with us as surely as that handshake we have had and which, with the promise of tomorrow, will impart, and so begin the process anew.

A first look at "Last Look"

By Paul Gordon Emerson
There are a handful of masters of the art of modern dance. Theirs are the works that transformed the field, reshaped our understanding of the possible, stood the test of time to remain fresh. Among the handful of that handful is Paul Taylor. His career, both as a dancer and as a dancemaker, spans the great age of modern. He danced for Graham. His own canon (he calls it a collection) is 125 dances in a choreographic career of 54 years and counting. The almost endless number of awards and accolades are perhaps summed by the San Francisco Chronicle, which calls him "the world's greatest living dancemaker." 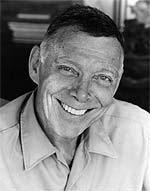 Mr. Taylor's work spans the whimsical and the wicked, the beautiful and the bizarre. Deep beauty lives side-by-side with deep inquiry into the human mind, spirit and soul. To take in an evening of Taylor is to be met by a mind always at work and in astonishing command of music and movement, pattern and purpose. He makes you laugh as easily as cry, and, most rare of all, takes on the darkest questions with an elegance and ferocity that avoids the enormous risk of cliché to reveal their truth s unselfconsciously. Of this subset, the inquiry into darkness, "Last Look" stands, as Jennifer Dunning of the New York Times wrote, "as th(e) most powerful and haunting of Taylor's works."

A post apocalyptic vision seems an odd work to take on the mantle of a masterpiece, but "Last Look" has attained this. The subject of a "Dance in America" special it retains its urgency even on the small screen. Live it unnerves as it empowers.

I first saw "Last Look" at a very different station in my life. As a defense and foreign policy analyst on Capitol Hill my days, nights and weekends were often completely consumed with the Cold War and the "long hard winter" which had endured throughout all my life and memory. Discussions of "throw weight" (meaning the ability of a nuclear missle to hurl warheads across the great expanse between Khazakstan and Washington, DC or Los Angeles) and yield, megatonage and blast radius, MIRVs and MARVs were as common for me over dinner as were those about the film at the Uptown. I was, at that time in the late 1980s a dabbler at best in dance. I dropped in and dropped out, and was far, far from the idea of dance as a career. "Last Look" was a cog in the wheel on the path to changing that. It changed, in an instant, my view of what was possible in dance. It was, in all ways, a "light bulb moment."

I remember distinctly sitting in the darkness of the Eisenhower Theater at the John F. Kennedy Center for the Performing Arts awaiting the second act of an evening with the Paul Taylor Dance Company. The score began in the darkness, elegant and giving little hint of the scene still unlit on the stage. And then, as the light grew, all I could think of was carnage, of that very thing all of us preoccupied with a nuclear exchange had, literally and figuratively, nightmares about. In the glint lay a mound of bodies, prostrate, heaped one atop the other and reflected in twisted and cantilevered array of mirrors that illuminated them and distended them all at once.

Over the course of the 20 minutes that ensued I wonder still if I took a breath. Horrified, entranced, compelled and conflicted, I thought perhaps that I had underestimated dance. For all the reading, all the intellectualizing, all the academic and legislative study I had undertaken in an attempt to make sense of, and in some small way make a contribution to, the demise of the nuclear era, I had never found in all those hours what the 20 minutes of "Last Look" had given. It had done so wordlessly and in a marriage of music, set and scene that seemed strangely, improbably perfect even as it was perfectly horrifying.

As I left the theater that night, face embedded in the program, I learned that Taylor himself was a Washingtonian transplanted to New York. I was a New Yorker transplanted to Washington. I remember walking home only because I forgot to hail a cab. Somewhere in that walk I also remember thinking "if I ever had a dance company of my own (which was simply out of the question) I'd want to share dances like "Last Look."

As CityDance has grown in these past few years the idea of "Last Look" has remained in my thoughts. In January of 2008, with a gifted cadre of dancers and a rehearsal director up to the task of staging a Taylor work, I wondered, finally, about actually asking Mr. Taylor for the honor of staging "Last Look." We were in New York as a part of the annual Arts Presenters Conference, and I asked Christopher Morgan, the aforementioned rehearsal director, if he would take a jump into the unknown and reach out to the Taylor organization.

I had no idea if we'd even get a reply.

An additional set of images from Friday at the Lansburgh Theatre.
These are all from Christopher K. Morgan's "Ties That Bind." 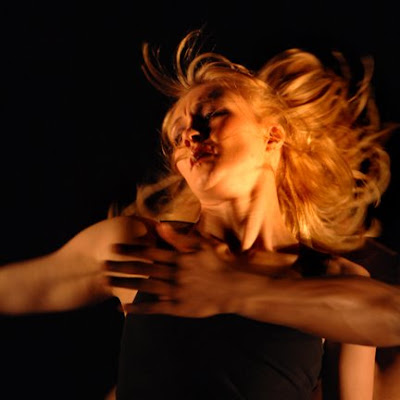 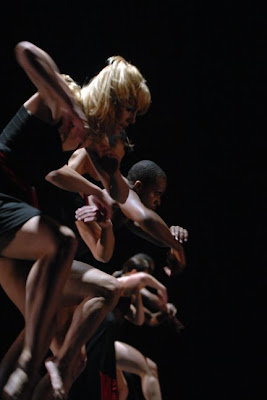 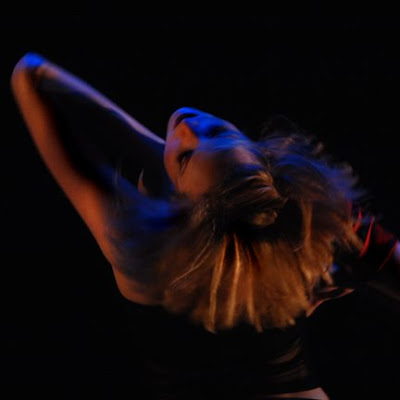 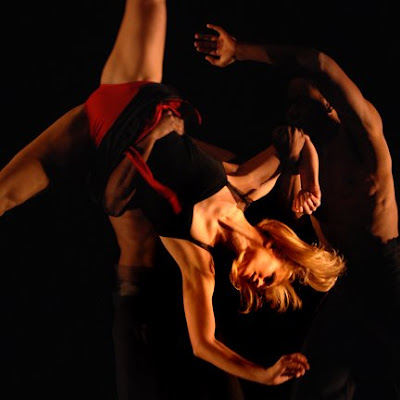 Heading into the second day of the Entangled run I thought I'd share a few images from yesterday. Rather than focus on the large sweep of the dances I shot more with mood in mind.

The first image is of Delphina Parenti in the world premiere of Kate Weare's "Scorched."
The second is Kathryn Pilkington in her solo "At Last" from Larry Keigwin's "Mattress Suite. 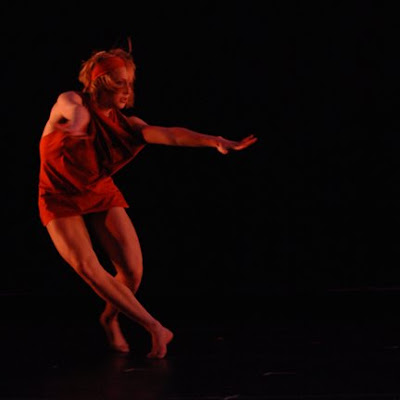 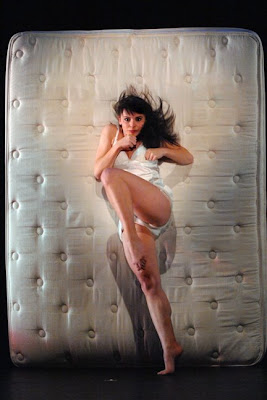