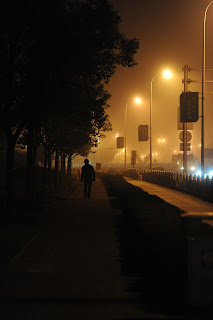 Sometime within the next 36 to 48 hours I will become a rice ball. This much is certain. We have been here a shade over four days and my consumption of the many and varied (albeit delicious) forms of rice has overshadowed virtually all other sensory impressions of this time in China thus far. 130 pounds of ambulatory, verbally challenged rice inside various wrappings from Hudson Trail Outfitter
s or Hugo Boss navigating the startlingly cold streets of the French Concession in Shanghai. Jasmine scented rice. Brown rice. Saffron rice. Rice with tofu. Rice at breakfast. Rice at lunch. Rice at….

How it is possible for a nation of 1.4 Billion to grow enough rice to feed itself boggles the mind. There are vats of it, seemingly endless vats of it everywhere. Bags of it in various weights dot the small street-side shops abounding here. Stacked, stuffed, packed and shelved from the street to the back of the diminutive rectangular notches cut into the low buildings which have stood since the 1930s in this part of the city under the linden trees planted by French colonialists who carved their enclave in Shanghai and required the Chinese themselves to obtain papers to enter parts of their own country for the privilege of working for people from Europe.

And we wonder why revolutions happen…

Even in the cold December air the smell of food dominates. Open-air preparation abounds, the scent of wok oils sizzling, the sound of stir fry flipping, cooks and their beans, tofu, onions and sprouts slipping in and out of sight through the steam of water and sesame oil. Hot coals on a fog-thick night turning heavy air red as the bicycles slip by and the occasional bone-rattling heavy truck bores a hole in your skull.

China, it seems, is always hungry.

At four am on a jet-lagged sleepless night walking down deserted streets the only things open on Shanghzi street is the 24 hour Japanese sushi stand (which makes great cappuccino) and McDonalds. The rain comes and the air clears and you smell, faintly, the sea after the water absorbs the dust and the carbon monoxide and the almost touchable dirt in the air. Beyond being hungry, China is every bit as polluted as it is reputed to be. You smell the food, but you taste the air before the rain.

Yet when the air clears the taste is sweet, the air so pure. It makes you long for it, and draws your awareness of what we sacrifice in pursuit of “modernization.”

A colleague told a story the other day of Shanghai. He said that he went out of the country for a week on business. When he returned he had friends arriving from overseas. To meet he chose a popular, delightful restaurant not so far from his house. When he arrived, not jus the restaurant, but the entire block was gone. Razed. Vanished.

He thought he’d lost his mind. “That’s China” he says.

On Shanghai’s east side entire neighborhoods, the size of cities, just spring into being. The Green Tree Hotel where we found ourselves on our first night was in a neighborhood that didn’t exist a few years before. “This – all this was vegetable gardens.” Re-bar loaded trucks, stacked metal - like old kindling - fill at every corner as history vanishes in days, replaced by towers erected willy-nilly everywhere. The city grows and people have to have places to live, and so the charm of two stories surrenders to the necessity of 40. Elevated roads out your sixth floor hotel window layer like some madman’s cake and you see, from that window, the old lady sipping tea as behind her the traffic clogs the elevated. Gardens spring up in the areas underneath the tangle of traffic exchanges and thick vines crawl in spyrograph-like patterns. Plantings drip over the highest elevated roadway, and you feel like you’re looking at a fantasy.

The US feels small, New York modest. Its like Los Angeles was supersized in a McDonald’s patterned-world. Come across the largest bridge in Shanghai, the carotid artery between East and West and you are so far up that you have to spiral down to the ground in three consecutive 360 degree loops, a hot wheels track run amok. It takes minutes to spin to the bottom and spill out into the semi-dark of the underpasses and “old” Shanghai.

Yet, in the end, it is magical. Shanghai is magical – a city spinning in multiple centrifuges at the same time. Shanghainese are clearly proud of their city, their enchanted city locked in the embrace of central planning and controlled infrastructural chaos.

Down the street a wok turns, the coals glow and the food turns in deep elegant twists from a skilled arm. The sound of traffic fades, the sound of mandarin rises in the laughter of a late night meal, chopsticks clicking and laughter spilling over into the night.

Posted by Paul Gordon Emerson at 1:31 PM No comments: