All that separates us from Afghanistan is a rushing, frantic river; 30 yards of water and the pitch dark of a moonless night. Including the one emanating from my screen I can count 16 lights, single 60 to 100 watt incandescent bulbs in my entire field of vision. All are on the Tajik side. Afghanistan, so close, is utterly black.  When we arrived there were no lights at all. Electricity is a capricious thing in this hamlet, appearing when if feels like it and vanishing with equal impishness. The river’s rush is a constant companion, along with the trills of night birds and amphibians, insects and mammals. 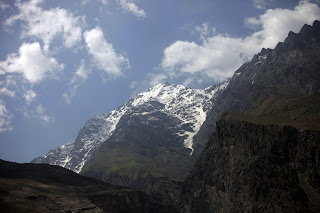 I know Afghanistan to be there because I saw it all afternoon across that one wicked body of water – wicked because it separates us from setting foot in Afghanistan, a lunatic desire our hosts at the US Embassy have tried deeply to dissuade me from realizing. “You have a single entry visa, so, good luck getting back in if you figure out how to go across,” has been the common source of discouragement. More effective: “we had someone determined to set foot in Afghanistan earlier this year. He walked across the bridge from Tajikistan to Afghanistan. The Afghans turned him away. When he went to come back to Tajikistan they wouldn't let him in because he’d used up his single entry visa. Took six hours, the Tajik KGB, the Afghan Foreign Ministry and the head of Consular Affairs in Dushanbe to get him admitted again to Tajikistan. All that time he stood in the middle of the bridge, the river running under him, with nowhere to go. He could have been there a month.” 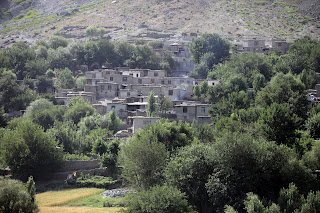 I seem to have settled on getting within 30 yards and no closer. I like bridges, but…

We knew we had reached the point where Afghanistan sat on the shore to our right not because of a sign, or a designation. No, we knew it to be there because it was our first sighting of entire villages of mud brick – villages completely and totally abandoned. No one in the fields. No one on the banks. Empty. Tiny towns of mud-brick, with glassless openings for windows and not a soul in sight.

An occasional donkey foraged, yet if it had anyone tending it, it was at distance. The domesticated animals had been left to their own devices, solitary beasts of burden munching on pale green grass as though they were the last inhabitants of earth. You wondered, when winter came, would anybody return to claim them, to shelter them, to feed them in the dead cold and deep snow of the high mountains?

At points a good throw of a solid stone would have landed on its shores. 90 feet away. 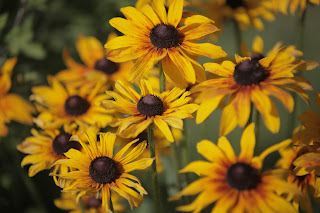 Overhead the Milky Way shines deep, a band across the night sky I have seen perhaps six times in my life. Such it is to grow up in the era of electricity and the thick haze of burnt fossils, and to be from Manhattan, where a cloudy night produces an orange sky more like a blanket than a void. To see the Milky Way stops you in the careful walk along the dirt road running through the village in which our guest house lies. That road is the often one lane path between Dushanbe and the South along the Afghan border.

Its name is the Pamir Highway. It is high, to be sure. And it is the only way to get where we’re going by land. Beyond that any resemblance to the word as we understand it in the States is purely coincidental. 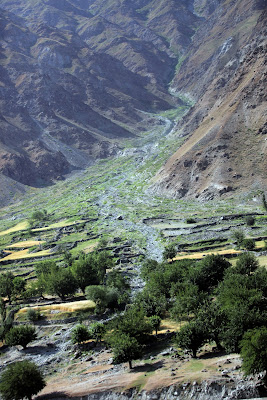 The Pamir Highway runs, for much of its length, along the Tajik bank of the river, the river separating Tajikistan from Afghanistan here in the Tajik southwest. A map shows it to be in the panhandle of Afghanistan – the part which juts out east in a sliver of land, separated from the chaos of the heart of the country by deep cut mountains and, its seems, but spirit.

The river funs with such force it sounds like a strong steady wind through thick forests, even 100 yards from its banks. Cars pass by perhaps every 15 minutes. Other than that, at 10:30 at night, the sounds are solely those of creatures of the night and of the river.

Earlier, along the first mountains in the climb from Dushanbe to here, the landscape was easily the most tortured I had ever seen. Tortured not by man. By nature. Mountains folded in on themselves as though rolled – like slices of cheese you bend. Deep folds and 45 to 90 degree thrusts – a geologic wonder that is almost impossible to describe.


The sheer geologic power of the Indian Subcontinent slamming into the Eurasian land mass, bending the flat earth into thick folds which reveal layer upon layer of sediment, at one time buried under the sea floor, now bent like so many slices and hurled up thousands of feet into the sky. In places volcanic rock, magma which had poured out millions of years ago, lay dolloped on top of the sedimentary rock, so much topping on the land.

Driving that landscape, dwarfed by it and at any moment tumbling down into it if the road gave way (which seemed all-too likely), the sense of being small within the geologic combat yet going on in these mountains, was everywhere.