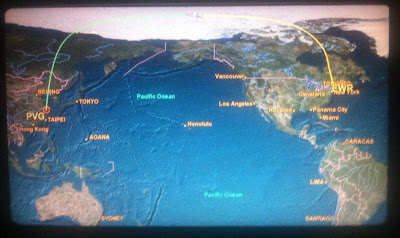 It's pitch black over the North Pole. Peeking out the portal over the shoulder of a dozing Chinese businessman (he’s in textiles) we’re moments from what is literally the top of the world. Due south Prudhoe Bay and Alaska lead to Honolulu. Other than that its blue water or white ice till the Antarctic ice shelves – more ice, just ice covering a landmass. Really, you could come up on Africa without ever seeing land before the coastline came into view. An entire globe covered in salt wet water and solid fresh water; the domain of great blue whales and marine life capable of circumnavigating the planet.

The dateline is about 20 minutes away and, over the equator, its high noon. But winter is in force below – out the cabin window its 102 degrees below zero (Fahrenheit) – a temperature I’ve never seen before.

At the Bearing Sea, for a 30 mile stretch, its just water to Antarctica. No a spit of land for 10,000 miles; for an entire half the earth.

Nightfall is over the East Coast. Its 5:44 and dark in DC on Thanksgiving weekend Sunday. At 3,400 miles traveled we’re less than halfway to Shanghai. The 8-inch view screen shows you a globe made so very, very small, tickling you with the Chuckchi and North Bearing Seas. Morning has come to Tokyo and all of Australia is in broad daylight in mid-summer. Nightfall will be close by the time we land.

Somehow all of that is visible real-time on this tiny monitor pulling its signal from a GPS satellite 17,000 miles above us (GPS satellites are in geo-synchronous orbit 22,000 miles above the surface, so were about a quarter of the way there) in this metal and plastic machine burning a form of kerosene (a uniquely gifted substance with a stunning greenhouse gas signature) hurtling 36,000 feet over the ice sheets on a black, black night. Yet if you could look up the stars would probably blow you away. And what the Hell is Agana and what’s it doing on this map?

What we do routinely now was impossible until 50 years ago, when jumbo jets capable of flying over the North Pole came online. Of course in those days we didn’t fly to China. We’d fought a real war with them in Korea in the 50s and something of a proxy war with them in Vietnam is the 60s and 70s. And it wasn’t till Nixon in 72 that we even started down the path we walk (or fly) now. Yet today (or yesterday since we crossed the dateline about 5 minutes ago and so now its Monday morning not Sunday night) Francisco and I left for Shanghai on one flight out of Newark, Kathryn, Rob and Amanda on another out of O’Hare and Christian left LAX on still another all bound non-stop for Shanghai and all landing within 60 minutes of one another – every seat sold on all three.

There’s nothing like 13 hour time-difference jet lag where you leave your house at 5 in the morning on one day and get to your destination at 3 in the afternoon the next day. You can’t quantify it. And I’d say you just have to experience it but……

Beth SMS’s me just before we left Newark asking when we could trade lives.

The trip to Shanghai is a dream come true for an endless array of reasons. For me, in this moment, the biggest is Friday afternoon at 3pm. In China there’s an instrument, a one-stringed thing that bears a minimal resemblance to a violin (essentially because it has a string and a bow) and which makes the most exquisite sounds I think I’ve ever heard. In 15 years of choreography I’ve never stopped wanting to collaborate with someone playing one. Friday I get my wish. At a program of senior Shanghai officials and some of the team from the US Consulate General in Shanghai we dance “Falling” as a part of the Opening Ceremony of the Festival. With an erhu placer as our soundscape.