If there were ever a moment when the word "team" takes on a special meaning, it's been the one that has spread out over the past 48 hours. There was no time to make the concert at Terrace a success. 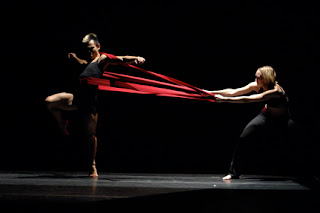 That's because of Julie Dobo, our lighting designer and technical director, who engineered a miracle. It's because of Christopher Morgan, who has day-in-and-day-out run the studio in a way that perfectly positioned the company to be at their best -- not just in dancing, but in the psychological space that is every bit as important as technical skill. It's because of Tish Hays, who every day handles all the details that no one ever sees and ever knows about, but without those details being handled everything falls apart. It's about the 10 people who danced, and our three guests, actor James Denvil and John and Andrew, who played beautifully 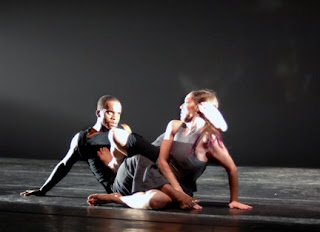 tonight. It's about Marija, Kristina and Kyle, who created exceptional costumes. It's about Rebecca, who in her first gig with us as our production manager kept everything on the rails.

I could, and should, go on, because, in the end, it's about everyone associated with CityDance. It takes a team and that team has to be at it's best through and through. It is, and this weekend it was.

It's a remarkable thing to have your expectations exceeded day after day. And that's what's happening. A great moment.
Posted by Company E at 12:49 AM

The dancing, costumes, lighting, choreographies were amazing. Everyone sitting around me was totally captivated and impressed the entire performance. The standing ovation was long overdue and it seems Kennedy Center is where you are best appreciated. My daughter Jade and I continue to be big fans! Congratulations on all your hard work and accomplishments.

Thank you for the interesting rehearsal videos on the CityDance blog. The work in preparation for a performance is fascinating and we appreciate getting a glimpse of the process. We look forward to an exciting season!